This Masterclass is meant to illustrate to young researchers the latest developments in the study of special values of L-functions and its connection to Mahler’s measure, polylogarithms, hypergeometric functions and K-theory.

The contents of the lectures by François Brunault and Wadim Zudilin have been gathered and expanded in the book "Many variations of Mahler measures. A Lasting Symphony" to be published in May 2020 by the Australian Mathematical Society Lecture Series.

The courses will require only a basic background in algebraic number theory and algebraic geometry and will be as self-contained as possible.

For a detailed list of references and preliminary reading we kindly refer to this PDF file.

The first lecture will be devoted to the construction of Beilinson's regulator for $ K_2 $ of algebraic curves and their function fields, with an emphasis on explicit formulas. We will give the definition of tame symbols and their links with residues. Following Boyd, Deninger and Rodriguez Villegas, we will explain how to use Jensen's formula to express the Mahler measure of a two-variable polynomial in terms of regulators for the corresponding curve.

More generally, we will explain how to define Deligne cohomology of complex algebraic varieties and discuss some cases where the differential forms can be made explicit. We will also give a brief survey of the properties of motivic cohomology and the definition of $L$-functions of varieties over number fields. Armed with this machinery, we will explain Deninger's method and its variants to relate multivariate Mahler measures to $L$-values in the framework of Beilinson's conjectures, generalizing the case of curves.

We will next explain how modular methods can be used to tackle particular cases of Boyd's conjectures on Mahler measures. Specifically, we will describe Beilinson's construction of the Eisenstein symbols (an algebraic version of Eisenstein series) in the motivic cohomology of elliptic curves. This construction turns out to be very useful in the case of modular curves and their associated universal elliptic curves, which we will also discuss. Using this, we will define the regulator integrals and give their main properties.

After a survey of known results and conjectures on multivariate Mahler measures, due to many people, we will explain the method initiated by Rogers and Zudilin to compute these regulator integrals in terms of $L$-values, first in the simple case of the Boyd-Deninger polynomial $x+1/x+y+1/y+1$, corresponding to an elliptic curve of conductor $15$, and then in greater generality for higher weight modular forms. As Neururer will explain in his talk, this leads to new proofs and generates new identities for Mahler measures of universal elliptic curves. We will explain the expected properties of the modular forms appearing in the formulas for regulator integrals. Finally, we will focus on some methods to find "nice" equations for powers of universal elliptic curves.

The course starts with some basics in algebraic number theory and a historical account of the Mahler measure of univariate polynomials/algebraic numbers.
The review includes of Lehmer's problem about the minimal Mahler measure, Mahler's own application of the measure in the theory of transcendental numbers, and simple relations between the logarithmic Mahler measure, regulators and $L$-values through Dirichlet's class number formula.
We then proceed to some partial resolutions of Lehmer's problem, due to Smyth, Dobrowolski and others, and to a related problem of Odlyzko and Serre about discriminants of polynomials.

Though the multidimensional generalization given by Mahler in the 1960s was targeted at its usefulness in transcendental numbers, potential applications of the multivariate Mahler measure in Lehmer's problem and a peculiar range of this generalized characteristic have made it a subject of independent study.

In our exposition of the (logarithmic) Mahler measure for polynomials in several variables, we highlight analytical aspects of the story focusing mainly on hypergeometric expressions of the measure and related differential equations.
This part goes in parallel with the material in lectures of François Brunault, where the logarithmic Mahler measure is linked with the regulators and $L$-values of algebraic varieties defined by the zero loci of corresponding multivariate polynomials.

We conclude the course relating the Mahler measure in three or more variables to planar random walk.

In particuliar, he and understood what kinds of polynomials could produce formulae like $(1)$.

In my I'll explain how I succeeded (2004) to generalise the above results to $3$-variable polynomials defining $K3$ surfaces.

Precisely, since in the same family, we obtain either results of type $(2)$ or of type $(3)$, where the Dirichlet term is often of the form $rd_3$, $r\in \mathbb Q$, what is the role of the Newton polytope of the family ( in the above examples, all the faces of the polytope have $d_3$ as Mahler measure)?

You can find the slides for the Bertin talk here.

We will survey on some of the identities that can be proven by exploiting the relationship between Mahler measure and the regulator. These involve mostly elliptic curves, but also some recent results with higher genus curves that were originally proven by Bertin and Zudilin with different methods.

The (logarithmic) Mahler measure of a polynomial $P$ in $n$ variables is defined as the mean of $\log \lvert P \rvert $ restricted to the real n-torus.
In 1997 Deninger noticed between the Mahler measure of a polynomial and period integrals of the associated algebraic variety. When P defines certain elliptic curves these period integrals are related to L-values by Beilinson's conjectures.

In the following many conjectured relations between Mahler measures of polynomials defining elliptic curves and the L-values (at $s=2$) of these curves were proved.
In my I will give an overview of this topic and discuss my current joint work with François Brunault, where we study the Mahler measure of a polynomial defining a K3-surface and relate it to the L-value (at $s=3$) of the surface.

The conference is funded by the Faculty of Science of the University of Copenhagen.
We will only be able to provide funding for the speakers.

The Masterclass will take place at the Department of Mathematical Sciences of the University of Copenhagen. The rooms for all the classes and the talks will be:

Auditorium 10, from Monday to Thursday;
Auditorium 8 on Friday.

Tickets and passes for public transportation can be bought at the Copenhagen Airport and every train or metro station. You can find the DSB office on your side as soon as you come out of the arrival area of the airport. DSB has an agreement with 7-Eleven, so many of their shops double as selling points for public transportation. A journey planner in English is available. More information on the "find us" webpage. 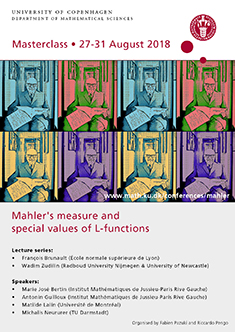