How to find us

Getting to Universitetsparken/HCØ and hotels

Getting to Universitetsparken/HCØ from Copenhagen Airport is easily done by public transportation: Take the Metro (look for the big M) from the Airport to Nørreport Station (10-15 minutes). The Metro departs every 4-6 minutes.
Ordinary trains depart from the Airport Terminal 3 every 10-20 minutes. Nørreport Station is just after the central station "København H" (4 stops, 15 minutes) in the direction Copenhagen/Helsingør - the opposite (wrong!) direction is Malmö/Sweden.
Nørreport Station is in central Copenhagen; most hotels are nearby, and the Institute for Mathematical Sciences is easily reached by bus. The details are given below.

You need to buy a ticket in the airport terminal before boarding the train (otherwise you'll be charged extra). See Tickets for public transportation below.

If you arrive by Inter-City train to Copenhagen, your end stop will usually be the central station København H; take one of the very frequent local trains further to Nørreport station (2 stops by S-train), and follow the directions from there (your inter-city ticket is valid for this as well).

From Nørreport Station to Universitetsparken/HCØ: Locate the bus stop of the busses 184, 185, 150S and 15E (it is in the northern part of the station area, on the same side of the road as the exits for the S-train). All four busses have Nørreport as their end stop, so there is no question of direction. Ask the driver to drop you off at Universitetsparken. The H.C. Ørsted Institute (HCØ) is the big building across the street to your left.

Getting to Universitetsparken/HCØ from the Hotels

From Ibsens Hotel or Kong Arthur

Walking (around 25 min): Leaving Ibsens hotel or Hotel Kong Arthur, you go to the lakes (they are at the end of the streets of the hotels). Turn right and walk along the lake (the street is called Nørre Søgade) until the first bridge. Then turn left on the bridge. After you cross the bridge, you walk on Nørrebrogade until you turn right on Fælledvej. You come to a square (Skt. Hans Torv) where you stay to the left and turn onto Nørre Allé. Walk on the left side of Nørre Allé. At some point, there will be a park on the right side of Nørre Allé and University buildings on the left side. There will be a sign for the H.C. Ørsted Institute (but it is not very prominent).

Walking (around 15 minutes): From Hotel Nora, walking is best. Leaving the hotel, turn right and follow Nørrebrogade (walking away from the lakes). Follow the directions described under Ibsens Hotel as you reach Fælledvej on your right.

By Bus: Take the metro (or walk) from Forum Metro Station to Nørreport Station. Then take the busses described above.

Walking (around 30 min): Walk along the lakes to the bridge "Dronning Louises Bro" (where the street Nørrebrogade starts), then follow directions described under Ibsens Hotel above.

Walking (around 30 min): See map above. Go through Kongens Have (which is labelled "Rosenborg Have" on the map) to Sølvtorvet and follow Sølvgade, then Fredensbro, Fredensgade, Tagensvej and Nørre Allé to HCØ.

Walking (around 20 min): From 9 Små Hjem walking is best. As you leave the hotel, turn left and walk to the end of the street. Turn right on Østerbrogade and walk to the square called Trianglen. Cross the square and go to the left corner. Continue along Øster Allé (you should have a park, Fælledparken, on your left) until you turn left on Borgmester Jensens Allé. You turn right on the first street, which is Universitetsparken. You can now see the H.C. Ørsted Institute to your left as you cross the intersection.

You can use the route planner below to find out how to get to Universitetsparken/HCØ by public transportation. A general route planner is also available.

All busses and trains (incl. metro) use the same ticket system, so only one ticket is needed for a journey by bus and train. It is 3 zones from the airport to Copenhagen/the H.C. Ørsted Institute. From the hotels to the H.C. Ørsted Institute it is only 1 zone, but you cannot buy tickets for less than 2 zones. Buy tickets on the bus (cash only, preferably exact change) or at ticket stands/machines at the train stations. Or buy via your mobile phone. Read about buying tickets here.

If you plan on taking the bus several times during your stay, it might be cheaper to use a travel card (Rejsekort) than buy single tickets.

The City Pass gives you unlimited access to buses, trains and metro in the centre of Copenhagen and to and from the airport (zones 1, 2, 3 and 4). You can buy a 24-hour or a 72-hour City Pass. The FlexCard allows you unlimited travel by bus, train and Metro for seven days in the number of zones you pay for. If you want to visit some of Copenhagen's attractions you should consider a Copenhagen Card which entitles you to unlimited bus, metro and train travel and gives you a discount or free entrance to many major attractions.

"Visit Copenhagen" also provides information about the various tickets and prices (in English). 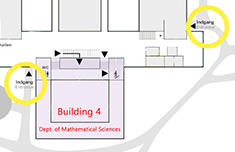 Find the entrances to the MATH building

Rent a Bycykel (City Bike) right in front HCØ at Nørre Allé. There are docking stations all over Copenhagen and Frederiksberg. With a monthly subscription for 70 DKK, the first half hour free, after which it costs 6 DKK/hour. Without subscription the price is 25 DKK/hour to rent a city bike.