Old knowledge in the lunch room

You can overlook centuries of scholarship, if you visit the lunch room at the Department of Mathematical Sciences. The department’s valuable book collection were kept in the mathematics historian's office, but now it can be viewed by anyone in the lunch room on the 4th floor. 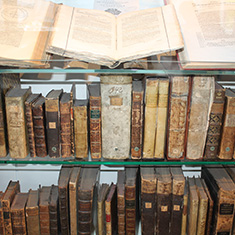 The collection includes many interesting books from the 17th and 18th century. A few of them even date back to the 16th century, for example an edition of Euclid’s Elements from 1546. It is now displayed on the inclined shelf in the middle of the bookcase. The plan is that this shelf will show changing displays of treasures from the collection. At the moment the following books are on display:

Euclid’s Elements in an edition from 1546. It is opened on the page, were Euclid proves that spheres are to each other as the cubes of their diameters. 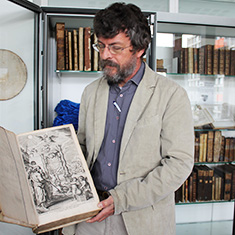 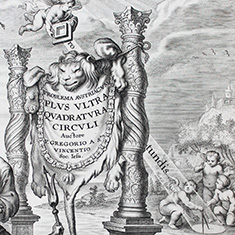 Gregorius St. Vincentius’ Opus Geometricum Quadraturae Circuli et Sectionum Coni from 1647. It is opened on the fine frontispice showing many allegories. For example the sun shining through a square hole but casting a circular image on the ground (the quadrature of the circle) and Archimedes explaining his famous theorem to the effect that a circle is equal (in area) to a right angled triangle with one side equal to the radius and the other side equal to the circumference of the circle. The book was instrumental in developing the new infinitesimal techniques. 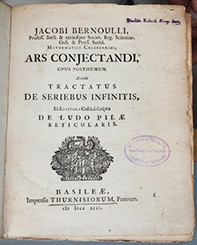 Jacob Bernoulli’s Ars Conjectandi from 1713 is the first major book on the theory of probability and statistics. It is because of its 300 years anniversary that 2013 has been named the international year of Statistics. The exhibited copy is in fact a first edition! It is showing the proof of the law of large numbers, one of the results for which it is famous

Fermat’s collected works published by his son in 1679. It shows a part of the correspondence that conducted with Pascal in 1654 on different problems concerning games of chance. This correspondence is often considered the beginning of the mathematical theory of probability.

The book collection contains many other famous works for example several editions of Newton’s Principia, but unfortunately not in the first edition. However, there are first editions of some of Euler’s books, such as his Introductio in Analysin Infinitorum fom 1748. It is the first work where infinitesimal calculus is presented as a theory of functions.

According to legend, the book collection was bought for the department by Svend Bundgaard before he went off in the mid 1950s to found the mathematics department of Aarhus University. It has probably belonged to a mathematician, but we do not know whom.

The bookcase is a specially designed and produced security case that should be extremely hard to break into. The company that has produced it also produces showcases for museums such as The National Museum and the Museums of the University. It weighs 800 kg.

If you have very special reasons (a visit of your head of state, research purposes or similar) you may ask Jesper Lützen to open the bookcase for you. It takes 10 minutes to open it, so be in time.

Next to the bookcase you will find a sofa and other furniture from Harald Bohr’s office at the university. Please have a seat.