He will tackle the impossible: learning causality from data

Jonas Peters, Associate Professor in Statistics from the Department of Mathematical Sciences, University of Copenhagen, has received 8.2 million DKK from VILLUM Young Investigator Program. It will enable him to form a small group to do research on "Causal Learning in Real World Applications”. 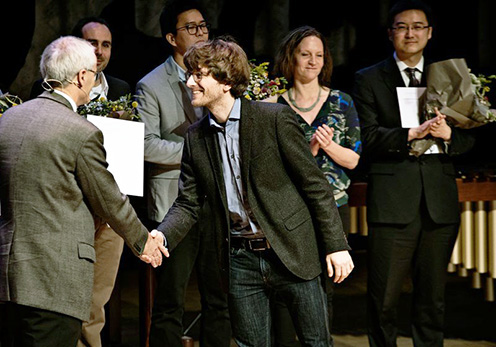 Jonas wants to develop tools that can enable scientists to build robust models, where predictions are based on causality. His goal is to learn something about the causal structure itself based on data obtained in the real world.

"Stains on your fingers and smoking are very much correlated. So we can make a predictive model saying, ‘if there are stains on someone's fingers, there is a higher probability that this person has lung cancer’. But this model is not causal: painting over your finger, does not reduce the risk of getting lung cancer. The model is not stable either: it breaks down in cold areas, where people wear gloves”.

“The model ‘smoking predicts lung cancer’ is closer to a causal model and therefore more stable; it is true regardless of wearing gloves, skin tone and whether you live in Denmark, Sweden or in Africa”.

“The fundamental idea in this project is to take this principle around: we should look for models that are stable over changes of environments. These models will be, in some sense, more causal. We will then extend this principle to different model classes, to different types of variables, to situations with hidden factors, and also to different applications”.

Jonas expects to work with colleagues from Germany and England in various research disciplines, e.g. Earth system science, biogeography, and computational biology. Two PhD students and a postdoc will also be associated with the project.

"We need to start with systems where we have basic knowledge of causality. A bit of ground truth. And then we apply our models to situations where there is no ground truth - and see what we get from it. We have to see if the assumptions we are proposing are making sense in reality or not," says Jonas.

- Do you have a dream goal?

“Yes… There are big causal questions in climate science. This is why I work with climate scientist in Jena. We will start with a small model on radiation, soil moisture and plant activity that is well understood. It's a very small causal system. But at the end of the day, we really want to understand what happens in climate change, don’t we?”

“We are pumping a lot of CO2 into the atmosphere; if we really want to understand what happens, we have to understand the causal process of the system. We do not know yet whether our methods will be good enough to tackle such complex questions… but at one point we have to try.”

“Yes, we hope so. Currently, we experience a big success of predictive models. The fundamental principle was already there 30 years ago. What we have seen the last years is that if you tweak the models a tiny bit, find faster algorithms, and have access to larger and better data sets, at some point you can solve more difficult tasks”.

“I think that in causal discovery we are at the beginning. We now have a couple of basic assumptions that allow us to think about causal discovery. I hope that in 30 years these systems will be more reliable, and will be used in practice. It’s a gradual process”, says Jonas.

Jonas is the youngest associate professor at the Department of Mathematical Sciences - born in 1984 in Nordhorn, Germany. He graduated from the University of Cambridge and the University of Heidelberg, and was a PhD student at the Max Planck Institute for Biological Cybernetics, Tübingen, and ETH Zurich where he received the ETH Medal for an outstanding PhD thesis in 2012.

Between 2012 and 2015, he was postdoc (Marie Curie Intra-European-Fellowship) at ETH Zurich, and visiting researcher at Microsoft Research in Redmond (WA), UC Berkeley (CA) and Carnegie Mellon University (PA). He became afterwards group leader of the Causality Research Group at the Max Planck Institute for Intelligent Systems, Tübingen.

In August 2016, he was employed as a lecturer at the Department of Mathematical Sciences, where he is affiliated with the Section for Statistics and Probability Theory. He has recently published, together with two colleagues, the book "Elements of Causal Inference: Foundations and Learning Algorithms".

The 18 researchers each receive between DKK 5 and 10 million to immerse themselves in mathematics, physics, astronomy, biology and chemistry, or in other words, projects on black holes, cone snails, malaria, water, electrocatalysis, neutrinos, metabolites and much more.