Professor Uffe Haagerup has received an honorary doctorate from East China Normal University (ECNU), Shanghai. China has only awarded 277 honorary degrees in the past 30 years.

From the award letter:

"The honorary doctoral degree in China is a rare award, only bestowed to the most distinguished individuals. Since the honorary degree system was first set up in 1983, the Academic Degree Board of the State Council of China, after receiving nominations from a short list of universities, has only awarded 277 honorary degrees in the past 30 years. Among those 277 recipients are Shiing-Shen Chern, Shing-Tung Yau, Noam Chomsky, Bill Gates, former US President James E Carter, current United Nation Chief Ban Ki-moon and several Nobel laureates.

"As a distinguished mathematician, you have made invaluable contributions to the field of mathematics, and your ground-breaking work has greatly inspired and continues to inspire your fellow mathematicians. We believe that your addition to the list of honorary doctoral degree will further enhance this honorary degree program.” 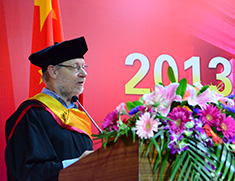 Monday June 24, Haagerup was presented with the honour degree at a ceremony at East China Normal University.

Uffe Haagerup (b. 1949) has been professor of mathematics at the University of Copenhagen since 2010, and works at the Department of Mathematical Sciences and the DNRF Centre for Symmetry and Deformation. Among his many laudations, other recent honors include a 2009 European Research Council (ERC) Advanced Grant and the 2012 European Science Foundation (ESF) Latsis Prize.