The winners and their results were presented on 14 December 2019 at the Conference on Neural Information Processing Systems, NeurIPS, the flagship of Machine Learning conferences.

Team CoCaLa, short for Copenhagen Causality Lab, won 18 of the competition's 34 categories and came in second place in all remaining 16 categories. Their overall score was 0.917 out of 1, measured in so-called AUC. The team was thus a clear winner of the overall prize. There were 40 teams with a total of 190 researchers in the competition.

The task in the competition was to perform causal structure learning. From some observations alone, the participants needed to reconstruct graphs that represent the underlying causal links of weather and climate systems. Quite an ambitious task.

"The Department is incredibly proud of the great results that Team CoCaLa has achieved in the competition," says head of department Michael Sørensen. "The team is based on the Copenhagen Causality Lab, which is a strong and internationally recognized research group, and the result emphasizes that the postdocs and PhD students who are associated with the group form a very strong team".

“Team CoCaLa has worked purposefully and efficiently during the competition. With 34 categories representing various practical and theoretical challenges, the competition was very complex. The team's success in virtually all categories is due not least to good collaboration, good division of labour and systematic monitoring of their own progress along the way”.

A better understanding of Earth's climate

"The data climate challenge was about obtaining some causal understanding of the Earth system. We are experiencing a massive anthropogenic intervention in the Earth system by the emission of greenhouse gases. The hope is that a better causal understanding can help us to better predict how the system reacts to that intervention, e.g., regarding temperature shifts, droughts, etc. The challenge uses a mix of simulated and real data and is a first step towards this goal”, explains Jonas Peters, professor from Copenhagen Causality Lab.

Niels Richard Hansen complements: “Competitions such as Causality 4 Climate are important for driving research forward by systematically benchmarking methods against each other. Systematic benchmarking and competitions have for years been the standard in predictive machine learning, and we are very positive about a similar development in causal machine learning. Ultimately, we need causal models if we are to evaluate the consequences of various interventions to prevent severe climate change”.

“The Causality4Climate challenge was part of NeurIPS, which is one of the premier conferences on machine learning and AI. Therefore, such a challenge comes with fierce competition and since one can never be sure to perform well, most groups do not use their real names. 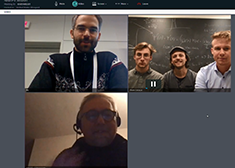 When we found out that the group from department chose our real name, the 'Copenhagen Causality Lab', we also became nervous”, Jonas Peters, co-founder of CoCaLa, laughs.

"But the group around Sebastian Weichwald did a good job on an important problem. They built up a powerful infrastructure which allowed them to try out many methods with minimal effort. They successfully combined causal methodology with statistical tools and they won the challenge by quite a margin”.

“Even though they were invited to join the conference in Canada, they decided to give the talk remotely. This saved more than 20 tons of CO2. We should really try to give more remote presentations," concludes Jonas.

The award ceremony on NeurIPS was live-streamed and recorded. CoCaLa is on from 31:30.

Slides about the competition and the results, presented at the conference.

Team CoCaLa has laid out all their algorithms as open source for others to use.

Team CoCaLa is part of a research group of the same name at the Department of Mathematical Sciences. See their website.