New centre for the mathematics of quantum theory

The VILLUM FONDEN has granted 30 million DKK to the “Villum Centre of Excellence for the Mathematics of Quantum Theory (QMATH)”.

The goal is to contribute to our mathematical understanding of quantum physics with special emphasis on the interplay between quantum matter and quantum information.

The centre's research area thus lies in the intersection of mathematics, physics and computer science. It is motivated by the emerging recognition of the surprising informational aspects of quantum physics with its potential use in quantum communication and long term prospect of building a quantum computer.

The centre will be hosted by the Department of Mathematical Sciences at University of Copenhagen and will function from the summer of 2016. It will be led by Professor Jan Philip Solovej (head of centre), Professor Matthias Christandl, and Professor Bergfinnur Durhuus. They have a world leading expertise in mathematical physics and quantum information theory recognized by several prestigious Danish and European grants. 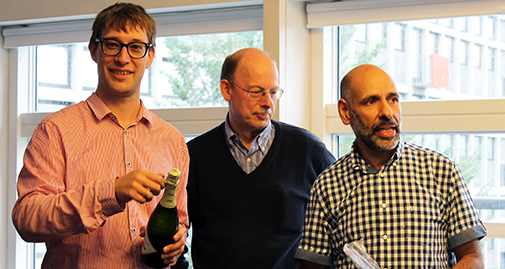 The centre is further strengthened by a national team of associate members with expertise in computer science and theoretical and experimental physics, and an international network.

The new QMATH Centre will, in particular, collaborate with the experimental groups at the Niels Bohr Institute - the Centre for Quantum Devices and Danish Centre for Quantum Optics - and the theoretical research groups at ETH Zurich in Switzerland and Microsoft Research in the USA.

The centre will address the key questions:

Through regular conferences and a visitors' programme, the centre will create a collaborative environment which has the ambition to be recognized worldwide as a leading effort to further our understanding of the mathematics of quantum theory. Through the education of young scientists at all levels and employment of additional permanent faculty this investment will have a lasting impact on Danish society.

THE VELUX FOUNDATIONS are comprised of the two non-profit foundations VILLUM FONDEN and VELUX FONDEN. Among our grant areas are natural, technical, health and human sciences. We also support environmental, social and cultural purposes in Denmark and internationally. In 2013 the two foundations gave joint donations of approx. 150 million EUR for non-profit purposes. Both foundations were created by Villum Kann Rasmussen - the founder of VELUX and other companies in the VKR Group, whose mission it is to bring daylight, fresh air and a better environment into people’s everyday lives.