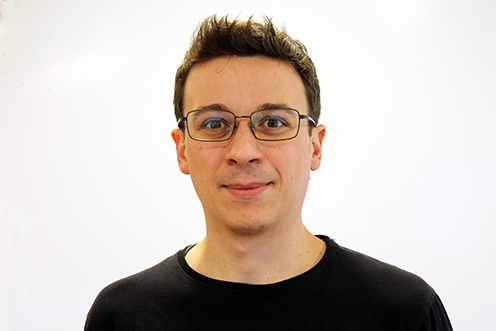 Angelo Lucia is currently working as a postdoc at the Center for Mathematics of Quantum Mechanics at the University of Copenhagen. He studied his bachelor and master degrees in University of Pisa, Italy, and completed his PhD in Mathematics in July 2016 at the Universidad Complutense de Madrid, Spain, under the supervision of prof. David Perez-Garcia and Toby S. Cubitt.

Lucia's work, collected in high impact publications, surprised even his supervisors, who defined him as "the best student" they have ever had.

Seven mathematicians around the age of 30, who have demonstrated their exceptional qualities for research by making contributions with international impact, are the winners of the third edition of the Vicent Caselles Mathematical Research Awards, organized by Fundación BBVA and the Real Sociedad Matemática Española (RSME).

The awards recognize "creativity, originality and achievement in the early years of the scientific profession", and are designed to stimulate those who are considered by mathematicians of great prestige in Spain as the next leaders of Spanish mathematics.

The Vicent Caselles Awards are endowed with 2,000 euros per prize winner. They are aimed at researchers in mathematics who are Spanish nationals or who have carried their research at a university or scientific center in Spain.

The awards are in memory of Vicent Caselles (1960-2013), professor of the universities of Valencia, Balearic Islands and Pompeu Fabra (Barcelona) and the most cited Spanish mathematician at the time of his premature death.