MATH in the media

The newspaper Weekendavisen had an article on forensic genetics on the front page of their science section 18 May 2018. The article is centred around statistician Therese Graversen from the Department of Mathematical Sciences. 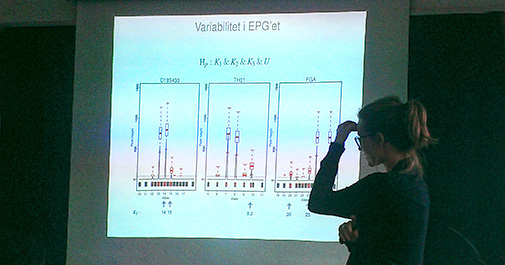 "DNA tracks are hailed as infallible, but in practice the science is muddy. Now a Danish statistician arouses international resonance with a method that can prove evidence of even small samples of DNA from several people."

This is how journalist and author Lone Franks launches his article that tells about Theresa's research and her work for different parts of the British justice system.

Therese took her PhD at Oxford University with Professor Steffen Lauritzen as supervisor. Here she contributed to preparing a new type of statistical method for calculating DNA mixtures. The method was published as a so-called discussion paper by the Royal Statistical Society, and Therese's PhD thesis got a medal.

In the following years, Therese's method has been applied in four English litigations. But it's not used by the Danish Department of Forensic Medicine, which has a monopoly on performing DNA analyzes in Denmark.

Lone Frank's article reviews the problems of DNA evidence that are neither simple nor safe. And Therese tells of her struggle for statistics and statisticians to play a greater role in the forensic genetics, which is dominated today by legal and biological experts.