The European Research Council (ERC) has awarded Nathalie Wahl a Consolidator Grant for her research in topology. 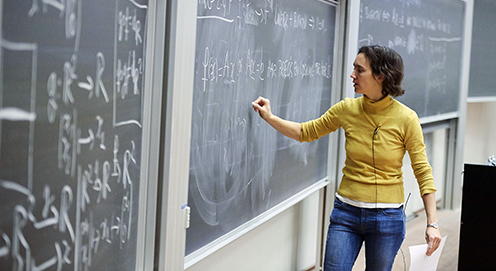 ERC has awarded a Consolidator Grant to 329 top researchers across Europe. A total of 2,538 research proposals were submitted, 13 % were selected. Ten researchers from Danish universities have been given the grant; five of them are from the University of Copenhagen.

ERC grants are awarded to outstanding researchers at various stages of their careers, and are used to build a team around an original and ground-breaking research idea. The programme is characterised by free research that stems from individual researchers’ knowledge and ideas.

Nathalie's project is called Loops and Groups and is at the intersection of algebra, topology and geometry, with the scientific goal of answering central questions about "homological stability, geodesics on manifolds, and the moduli space of Riemann surfaces".

Homological stability is a subject that has seen great progress in recent years. Nathalie's recent work has opened up new perspectives on this field, thru, among other things, associating a canonical family of spaces to any stability problem.

Loop spaces can be used to study geodesics on manifolds, and the project proposes new methods for studying the connection between these two mathematical objects.
The project combines breakthrough methods from homotopy theory with methods from algebraic, differential and geometric topology. Some of the goals are high risk, but even partial results will be of significant interest, says Nathalie.

Nathalie received the Female Research Leader Award of the Danish Council of Independent Research in 2009, and the same year the ERC Starting Grant, which enabled her to demonstrate her skills at the international forefront of research, and as a research leader.

With the ERC Consolidator Grant Nathalie has funding for a research group of three PhD students and three postdocs for five years.