Professor of Insurance Mathematics Thomas Mikosch has received a grant from the Danish Free Research Foundation (DFF) for the project "A large deviations approach to heavy-tailed time series". 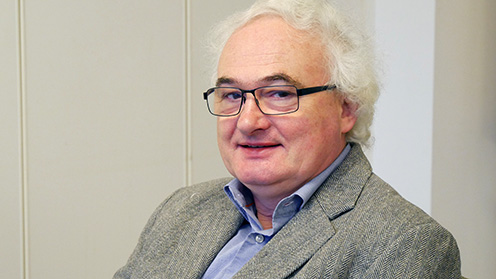 The DFF grant of DKK 2,861,626 will support a three-year PhD project and one-year postdoctoral employment. Thomas Mikosch has described the project in his application to the fund as follows:

”In this project, we will introduce multivariate subexponential distributions and subexponential stationary time series. We will approach this problem through understanding the corresponding large deviation probabilities for sums of independent subexponential random vectors. This approach is motivated by the success story of regularly varying time series models including the popular ARCH-GARCH family used for modeling the returns of speculative financial assets.

“The distributions of this class are subexponential. They have the disadvantage that certain (power) moments are infinite. However, in numerous applications in insurance, financial time series analysis, stochastic networks, and other fields of applied probability theory, one finds distributions with moderately-heavy or light tails. For these, only a few results exist in the multivariate case. The goal is to extend known univariate classes such as the subexponentials to higher dimensions, to find flexible dependence structure in space and time, and to study their properties with respect to extremes."