Thursday, August 29th, the Department of Mathematical Sciences celebrated a Niels Bohr professorship and the opening of a new research frontier in Danish mathematics in the arithmetic area. 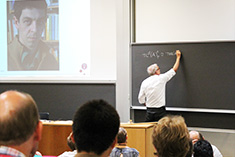 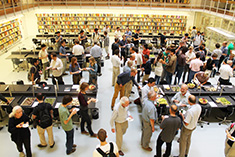 Reception at the Mathematical Library

The UCPH Department of Mathematical Sciences has thus been able to pull Professor Lars Hesselholt home from Nagoya University in Japan. Lars is married to a Japanese, and the first western mathematician who has been permanently employed at professor level in Japan.

There has been allocated a total of 167 million DKK to support the six professorships, and the Niels Bohr professors will the next five years spend between 50 and 100 percent of their time in the Danish research environments.

Lars Hesselholt is originally trained in topology - the area of mathematics exploring symmetries and deformations - but is today an international top researcher in another area in mathematics, the arithmetic. Arithmetic explores the mysteries of numbers with geometric methods.

Arithmetic geometry is an extremely important area of modern mathematical research. While this field internationally is very active and reputable, it is not represented at Danish universities. It is one of the main objectives of the Niels Bohr professorship to establish arithmetic geometry as a strong and active research area at University of Copenhagen.

With the Niels Bohr professorship follows 30 million DKK. The grant runs from April 2013 to March 2018. So far, the following researchers are attached:

Reception in the library

Afterwards there were a reception in the Mathematical Library, which has been renovated and remodeled, with study places for all students in HCØ Complex. The official opening of the new library was marked along with the reception.

Refreshments were served - probably for the first and last time in the library...