Masterclass: Scissors congruence, then and now

Postponed to 2021. The actual dates will be confirmed.

Description of the course

The scissors congruence problem famously goes back to the third problem in Hilbert's list at the turn of the 20th century. We say two polyhedra are scissors congruent (s.c) if we can decompose one into subpolyhedra and reassemble the pieces perhaps differently to obtain the other. He posed the question that whether two polyhedra in R^3 with the same volume are scissors congruent. His student, Dehn found a new invariant of polyhedra (now known as Dehn invariant) and used it to show that the cube and the regular tetrahedra with the same volume are not s.c. The notion of s.c for polytopes makes sense in all dimensions and also in all geometries e.g. spherical and hyperbolic.

A large variety of mathematical ideas were used to understand this seemingly elementary subject. In particular, 40 years ago the relation between s.c and algebraic K theory was formed by relating the s.c group of polytopes to the group homology of Lie groups (isometries of the corresponding geometries) as discrete groups. As a consequence, for example, it was shown by Sah (1989) and Suslin (1991) that the third homology of SL_2(C) is a divisible group. This was the first nontrivial example of the Milnor-Friedlander conjecture in K-theory.

Recently Inna Zakharevich and Jonathan Campbell made a progress by relating conjectures of Goncharov on scissors congruence in all dimensions to a conjecture of Beilinson in algebraic geometry. Their new paper is featured in a recent article by Quanta Magazine (sponsored by the Simons center) as a "substantial step" toward understanding s.c in all dimensions.

The goal of this masterclass is to understand this new approach, and how different conjectures are related.

In the series of talks he will give some background on the relation between scissors congruences and algebraic K-theory as envisioned in the work of Goncharov.

In the first talk he will give some background regarding motives and the motivic picture on algebraic K-theory. Then he will explain Goncharov's ideas on how the Dehn complexes should be related to the cobar complexes for the motivic Galois group of mixed Tate motives over the complex numbers. He will also make these ideas explicit in the cases of weight 2 and 3.

The second talk will discuss analytic invariants on algebraic K-theory, regulators and polylogarithms, and how these relate to volumes of polyhedra. Again, he will try to make the discussion explicit in the dilogarithm and trilogarithm case.

The conference/masterclass will take place at the Department of Mathematical Sciences, University of Copenhagen. See detailed instructions on how to reach Copenhagen and the conference venue.

A journey planner in English is available.

More information on the "find us" webpage.

We kindly ask the participants to arrange their own accommodation.

We recommend Hotel 9 Små Hjem, which is pleasant and inexpensive and offers rooms with a kitchen. Other inexpensive alternatives are CabInn, which has several locations in Copenhagen: the Hotel City (close to Tivoli), Hotel Scandivania (Frederiksberg, close to the lakes), and Hotel Express (Frederiksberg) are the most convenient locations; the latter two are 2.5-3 km from the math department. Somewhat more expensive – and still recommended – options are Hotel Nora and  Ibsen's Hotel.

An additional option is to combine a stay at the CabInn Metro Hotel with a pass for Copenhagen (efficient and reliable) public transportation. See information about tickets & prices.

Graduate students and other early career researchers can apply for financial support to partly cover local expenses. If you wish to apply for support, please indicate this on the registration form. The support should be roughly DKK 500 per day, at most DKK 2500 in total. 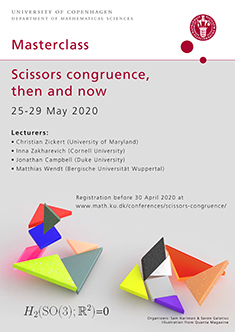