Homology and homotopy of configuration spaces 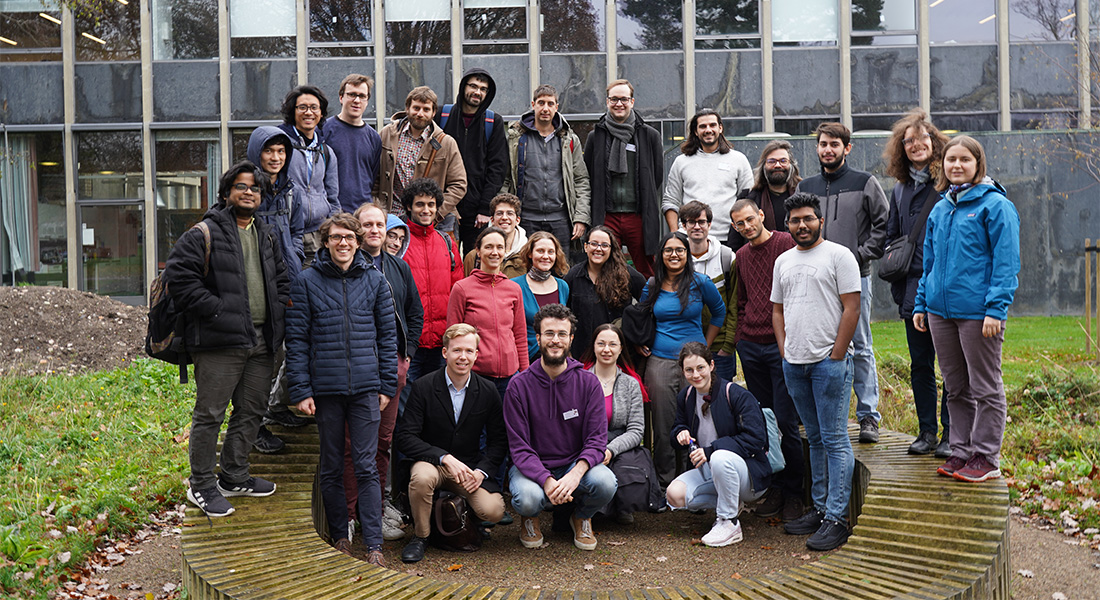 In addition to research talks there will be time to work on problems proposed by the participants.

The workshop will take place in person and the talks will be streamed for participants who cannot participate physically.

Graduate students and other early-career researchers can apply for financial support to partly cover travel and accommodation expenses. The support should be roughly DKK 500 per day, at most DKK 2500 in total.

See pictures from the workshop

In classical algebraic geometry, discriminants appear naturally in various moduli spaces as the loci parametrising degenerate objects. The motivating example for this talk is the locus of singular sections of a line bundle on a smooth projective complex variety, the complement of which is a moduli space of smooth hypersurfaces.
I will present an approach to studying the homology of spaces of non-singular algebraic sections of vector bundles. This is done by proving an h-principle which reduces the problem to a purely homotopical one. Using a bit of rational homotopy theory, one may then prove a homological stability result for moduli spaces of smooth hypersurfaces of increasing degree. The integral situation is more involved but can be approached using tools from stable homotopy theory.
---
Oishee Banerjee
Cohomology of the space of polynomial morphisms on $\mathbb{A}^1$ with prescribed ramifications

In this talk we will discuss the moduli spaces Simp^m_n  of degree n+1 morphisms on A^1 with "ramification length <m" over an algebraically closed field K. For each m, the moduli spaces Simp^m_n is a Zariski open subset of the space of degree n+1 polynomials over K up to Aut(A^1_K). It is, in a way, orthogonal to the many papers about polynomials with prescribed zeroes- here we are prescribing, instead, the ramification data. We will also see why and how our results align, in spirit, with the long standing open problem of understanding the topology of the Hurwitz space.
---
Luciana Bonatto
Decoupling monoids of configurations on surfaces

The monoid of oriented surfaces with one boundary component has featured prominently in the works of Miller and Tillmann and has been essential to understanding the Mumford conjecture. On another direction, Segal's monoid of configurations in euclidean space originated a branch of scanning results. In this talk, we are going to discuss a combination of these and look at the monoid of configurations on oriented surfaces. More than being a model for the monoid of punctured surfaces, this allows us to look at configurations with labels and even with collision rules. We will show that the group completion of this monoid does not detect that the points in the configurations are constrained to the surface: it simply sees surfaces and particles in the infinite Euclidean space. In other words, the particles get decoupled and this group completion splits as a product of the well-known spaces originated from the surface and Segal's monoids.
---
Florian Kranhold
Clustered configuration spaces as E_d-algebras

It is a classical result that configuration spaces of labelled particles in a Euclidean space are free E_d-algebras and that their iterated bar construction is equivalent to an iterated suspension of the labelling space. We consider a variation: the configuration space of labelled *clusters* of points in a Euclidean space. These spaces are again E_d-algebras, but in general not free. In this talk, we want to find geometric models for their iterated bar construction and achieve an E_d-cellular decomposition into free E_d-algebras. We will give a full answer for d=1 and partial answers for d>1.
---
Quoc Ho
Higher representation stability of generalized configuration spaces

It was discovered by Galatius–-Kupers–-Randal-Williams that the failure of homological stability itself can exhibit stability phenomena, dubbed secondary homological stability. In the setting of representation stability, Miller--Wilson showed that a similar phenomenon, secondary representation stability, occurs for the homology of (ordered) configuration spaces for non-compact surfaces. We will formulate and prove higher representation stability results for the cohomology of (generalized) configuration spaces of a scheme/topological space. These stability results have a slightly different flavor from the one proved by Miller--Wilson. The main tool we employ is the theory of factorization homology with coefficients in twisted commutative algebras (TCAs). The results themselves are formulated in the language of derived indecomposables in the sense of Galatius–-Kupers–-Randal-Williams. Both of these will be reviewed in the talk.
---
Roberto Pagaria
Betti numbers of ordered configuration spaces on an elliptic curve

Ordered configuration spaces on an elliptic curve (topologically a 2-torus) are small non-trivial examples of configuration spaces on closed varieties. However, their cohomology is not well-understood: it can be described using the Kriz model, but its Betti numbers are unknown.
We will apply recent techniques of representation theory in order to simplify the Kriz model of elliptic curves and obtain information about Betti numbers and their growth.

In this talk, we focus on the problem of computing the cohomology of the unordered configuration spaces of a manifold as a representation of the mapping class group of the manifold. We give a theorem that computes this representation in terms of the cohomology of the mapping space from the given manifold to a sphere of high enough dimension. We then outline how applying this theorem gives a complete answer to the problem in the case of compact oriented surfaces with one boundary component. Meanwhile we define the terms involved in describing the representations that appear here and deduce how (non)trivial the action of the Johnson filtration is on them.

There will be problem sessions on each day of the workshop with the following format:

We're looking for problems that are related to the topic of the workshop and are open (in some sense), but conceivably solvable during the workshop. Or at least some special case should be approachable by small groups during these sessions.

The workshop will take place at the Department of Mathematical Sciences, University of Copenhagen in Auditorium 6. See detailed instructions on how to reach Copenhagen and the conference venue.

A journey planner in English is available.

More information on the "find us" webpage.

We kindly ask the participants to arrange their own accommodation.

We recommend Hotel 9 Små Hjem, which is pleasant and inexpensive and offers rooms with a kitchen. Other inexpensive alternatives are CabInn, which has several locations in Copenhagen: the Hotel City (close to Tivoli), Hotel Scandivania (Frederiksberg, close to the lakes), and Hotel Express (Frederiksberg) are the most convenient locations; the latter two are 2.5-3 km from the math department. Somewhat more expensive – and still recommended – options are Hotel Nora and  Ibsen's Hotel.

An additional option is to combine a stay at the CabInn Metro Hotel with a pass for Copenhagen public transportation (efficient and reliable). See information about tickets & prices.

The deadline for registration was 10. November 2021.