Ceremony in honour of the recipient of the 2015 Ostrowski Prize: Peter Scholze, Bonn.

Title: On some relations between topology and number theory

Abstract: In the late 19th century, the differential geometer L. Bianchi first considered certain highly symmetric hyperbolic 3-manifolds now known as Bianchi manifolds. Their topology, as encoded in their homology groups, is quite mysterious, and conjectures of Grunewald from the 1970's and later by Ash reveal a surprising connection to representations of the absolute Galois group of Q; it can be seen as a form of the Langlands philosophy. I will try to describe this conjecture, and the recent progress made on it and related questions. 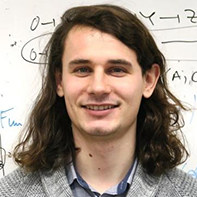 The Ostrowski Prize for 2015 is awarded to Peter Scholze for his breakthrough work in arithmetic algebraic geometry. Peter Scholze was granted a Bachelor's degree in 2009, a Master's degree in 2010 and a PhD in January of 2012 from Universität Bonn. Since October of 2012 he has been Professor at the Hausdorff Center for Mathematics in Bonn holding a Hausdorff Chair.

Scholze is awarded the Ostrowski Prize for developing the theory of perfectoid spaces and successfully applying the theory to address a number of difficult open questions. This theory allows one to reduce problems about algebraic varieties over rings of mixed characteristic to problems about algebraic varieties over rings in a fixed positive characteristic. Scholze proved Deligne's weight monodromy conjecture for varieties that are nonsingular complete intersections in projective space using the theory of perfectoid spaces. This represents the first major progress in the last thirty years towards Deligne's conjecture.

He has also used perfectoid spaces to establish p-adic Hodge theory for rigid analytic spaces. Further with Weinstein he showed that Rapoport-Zink spaces at infinite level are perfectoid spaces. By studying these spaces they are able to reprove and generalize the Gross-Hopkins conjecture. Scholze has also used the theory of perfectoid spaces to establish the existence of Galois representations associated with the mod p cohomology of the locally symmetric spaces for GLn over a totally real or CM field. In so doing he resolved conjectures of Ash, Grunewald and others which had resisted attack for forty years.