The operator algebra seminar is usually at 3:15pm on Wednesdays. Please write to Adam Dorn-On or Mikael Rørdam to suggest a speaker. See the calendar or the seminar webpage for upcoming talks. See also the Conferences/workshops page and the webpage for the (junior) "What is...?" seminar.

Funding: The group is part of the Centre for Symmetry and Deformation, funded by the Danish National Research Foundation.

These two pictures actually have a lot in common - but what? 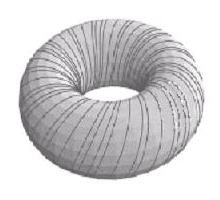 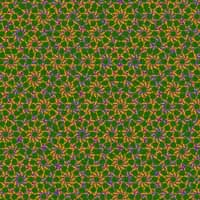 The solution to this question is provided by mathematics. Mathematics is much more than just doing sums or finding points on a circle. It is and always has been a very important tool for all scientists, which they use to unravel structures that cannot be observed directly. However, as our understanding of the world around us grows, requirements for the tools we employ and thus for mathematics become more demanding.

The latest mathematical tool we use is called "non-commutative geometry". In order to understand what it is about, we have to look again at our pictures. If you follow the line on the donut on the left-hand side closely, you will see, that it never touches the same point on the surface twice. In other words, it only looks as if the line comes back to its point of origin. If you look at the pattern next to it, it seems to repeat itself, but on closer inspection there are minute differences. Again, it seems as if there is symmetry, but in reality there is not.

The pictures above are computer-generated, so they may be taken for some game without any real purpose. However, the photograph next to the text is a real life "diffraction pattern", i.e. the pattern obtained when sending light through a crystalline material like salt. If you showed it to a chemist some 25 years ago, he would not have believed it was genuine. At that time it was held that nature produces only a limited number of 100% symmetric patterns. As chemists developed new and more complex materials, however, they discovered "abnormal patterns". These patterns are again almost symmetric, but based on natural materials like sophisticated metal alloys. As a matter of fact, the crystal-like picture above is the representation of a real-life alloy which produces the diffraction pattern shown here.

Now, for scientists it is very important to be able to understand and explain these almost symmetries so that they can work with them. As it turns out, the only way to fully explain these phenomena requires a new way of thinking of space. The problem is that on the microscopic level our traditional notion of distance is no longer sufficient. For example, it is no longer possible, so to speak, to determine both the length and height of a matchbox at the same time.

A mathematician describes this situation by saying that the space coordinates of length and height do not commute with each other. Even the idea of a point, i. e. a very well defined prick on a surface, has to be discarted. Instead, we have a "fuzzy point", and its two coordinates cannot be given simultaneously. Consequently, very simple spaces, which scientists have traditionally treated as single points, can have many different geometric structures. 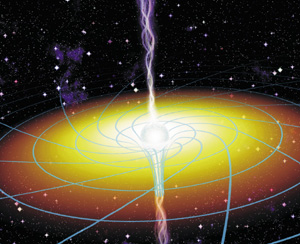 This has a lot of unexpected consequences. Just to give one example, a non-commutative structure of space changes the concept of time. Time has always been considered as independent of space. However, the "fuzzy" non-commutative structure implies that time is a derivative of space. To illustrate this point: The last picture shows a rotating black hole. We are told by astronomers that next to such a monster time moves differently than in normal space because of its enormous mass, and if you are far enough away, time will be "normal" again. According to non-commutative geometry any space has a similar effect on time without mass being a factor. And this property goes a long way in explaining some the inconsistencies of modern physics.

Non-commutative geometry is a comparatively recent development. It arose approximately 20 years ago out of the desire to fine-tune the mathematics used to describe phenomena on the atomic level, like the almost symmetric diffraction patterns shown above. As physicists and chemists began to probe ever deeper into nature, their results appeared to be more and more contradictory when examined with their classical mathematical tools. However, nature is consistent, which meant that the old tools were insufficient, and better tools, such as non-commutative geometry, had to be developed.

Non-commutative geometry requires a more holistic, universal approach to mathematics. Mathematicians from different, traditionally separate fields have to work together in order to cover the various aspects of the apparent inconsistencies. Each one supplies important knowledge from their fields to solve various problems arising along the way. Mathematics becomes closer to modern physics and acquires a more experimental flavour.