School-children learned how to gamble

The Festival of Research, 24 and 25 April 2014, was a success across the country. At the City Hall Square in Copenhagen the Department of Mathematical Sciences were present with a "Gaming Café". Ten school classes and interested citizens and tourists learned about game strategies.

The Mathematical Gaming Café was staffed by professors Mogens Steffensen, Rolf Poulsen and Søren Eilers and a handful of math students.

Mogens Steffensen told the pupils about gambling and the relationship between reimbursement rates and the coveted excitement.

They got a proposal for a specific goal and a related strategy before they were allowed to play Roulette.

Rolf Poulsen also discussed secure gains and attractive games. And then he organized tournaments in Rock-Paper-Scissors – before and after telling about useful strategies.

Søren Eilers told the audience to stop while the going is good - when playing Pass the Pigs. He even gave the audience the formula for when the game is good.

There were also some scientific underpinning tips on how to win in Wordfeud and Scrabble. It's a matter of cashing a bonus.

Friday afternoon was a professor-free zone, where three math students invited to an open Gaming Café. Strategies and tricks were discussed with a Danish and international audience. 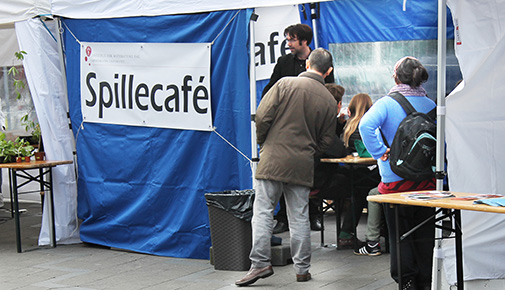 School classes could pre book the lectures - but passers-by were also welcome.
Photos by Jim Høyer.