On Friday 16 June, Ib Skovgaard was celebrated with a symposium and a subsequent well-attended reception.

The event, which took place at Frederiksberg Campus, where Ib spent most of his working life, was arranged in collaboration with the Department of Biostatistics, SUND, and the Danish Society for Theoretical Statistics. 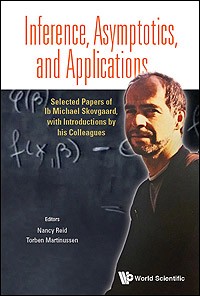 The occasion for the event was that World Scientific has recently published a book that brings together Ib Skovgaard's most important and influential contributions to statistical science, all provided with introductions from colleagues from around the world that set the papers in context. There were therefore participants from several countries, not least Canada and Italy.

The speakers were Steffen Lauritzen, who was Ib's Ph.D. supervisor, Per Brockhoff, who was Ib's first PhD student (and current Head of Department at DTU Compute), as well as Nina Munkholt and Ruggero Bellio who both, like Per, have contributed to the book.

Read more about the book

Head of Department Michael Sørensen says: "It was a nice day with exciting lectures that showed both the breadth and depth of Ib Skovgaard's research."