Statistician behind research in narwhal’s clicks, calls and buzzing

Researchers from the Greenland Institute of Natural Resources have received extremely detailed data about a group of narwhal’s sounds. Professor Susanne Ditlevsen from the Department of Mathematical Sciences performed statistical analyzes for the research team. 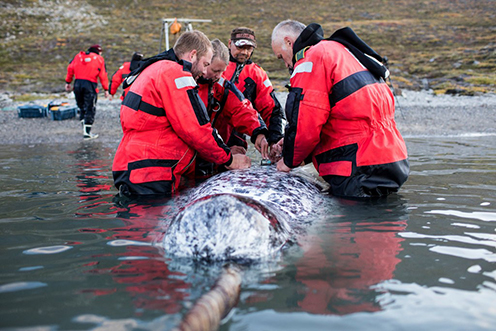 The researchers' findings have been published in the online magazine PLoS ONE, June 13, 2018. From there the results – and the sounds - of the communicating narwhals in East Greenland have spread to ScienceNews, New York Times, The New Yorker, videnskab.dk and other media.

The new study utilizes the sounds of the narwhals to gain a unique insight into their lives. The researchers have identified three types of sounds in the narwhals: clicks, buzzing and calls. The first two are used to search for food on very deep water, while the more social calling is only used close to the surface.

Each of the six whales was fitted with some newly developed recording and telemetry equipment. The equipment fell off by itself after one week. The sounds - or the absence of sounds - have been computerized second to second, along with data on the whales' locations from satellite measurements.

- It has been very exciting to work with the biologists. With the new technology, they get access to unique data, and it's interesting to help develop ways to analyze data so we better understand whales' behaviour.

- The Data Science Laboratory plays a prominent role for these collaborations, and we are already in the process of the next project. Here the data set is even bigger: Besides having information about depth, geographical location and sounds every second - over many days, for more whales - they now also measure various biometric information such as heartbeat. It gives us a unique opportunity to understand how whales react to man-made sound effects, says Susanne Ditlevsen.

As sounds obviously are an important part of how the narwhals navigate after food and communicate with each other, the researchers fear that it may be of great significance if new and very powerful sounds come into the ocean around them - as the ice in the Arctic disappears. It can be sounds from fishing or seismic surveys, using sound waves to find minerals and raw materials in the seabed.

In the next phase, the Greenland Institute of Natural Resources will measure the reactions of the whales when firing air guns. One fears that strange sounds will stress the whales. But on the other hand: A calving iceberg makes a lot more noise than any human activities.