Professor Lars Hesselholt has received a Niels Bohr professorship and its associated grant of DKK 30 million from the Danish National Research Foundation. 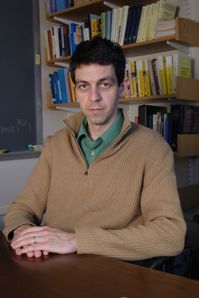 Lars Hesselholt is a professor at Nagoya University, Japan and is currently visiting the Centre for Symmetry and Deformation.  His wife is Japanese, and Lars was the first mathematician of western origin to be hired in a permanent position as professor in Japan.

Lars Hesselholt's main research was originally topology - the are of mathematics that studies symmetries and deformations - and he is now one of the leading experts on topology.  He has later also become a leading expert on another field of mathematics, namely arithmetic - an area where numbers are studied using geometric methods.

While Denmark traditionally has been a leading country in the area of topology, the area of arithmetic has until now been weakly represented in Denmark, even though arithmetic has become an increasingly important research area of contemporary mathematics.

- The Niels Bohr professorship for Lars Hesselholt opens an entirely new research front in Danish mathematics which has been long missed, says ERC-professor Ib Madsen about the grant.

Lars Hesselholt has within the last three years visited the University of Copenhagen on numerous occasions, mainly to work with Ib Madsen whom he has collaborated with for several years.  Lars Hesselholt and Ib Madsen are currently working on a joint book concerning the border area between arithmetic and topology.