The Department of Mathematical Sciences is proud to have Field Medalist Stanislav Smirnov (Professor in Geneva, Saint Petersburg and Moscow) as our Harald Bohr Lecturer 28 November 2017. His lecture was titled “Complex analysis and 2D statistical physics”. 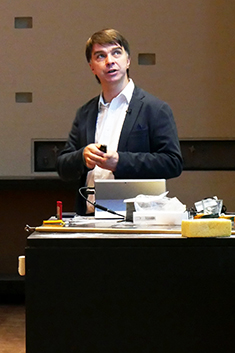 Stanislav Smirnov received the Fields Medal in 2010 for his “ingenious and astonishing work on the existence of scaling limits, or continuous limits, of lattice models in statistical physics”. (Excerpt from the Laudatio delivered at the International Congress of Mathematicians 2010, India, by Harry Kesten, Distinguished Professor of Mathematics, now Emeritus, at Cornell University, USA.)

Like many Fields medalists, Smirnov demonstrated his mathematical talent at an early age: he was ranked first at the 1986 and 1987 International Mathematical Olympiads.
He was an undergraduate student at the Saint Petersburg State University, and obtained his Ph.D. from Caltech in 1996 (at age 26), with Nikolai Makarov as his thesis advisor. His thesis was titled “Spectral Analysis of Julia sets”. He was then a Gibbs Instructor at Yale until 1999, while holding short-term research positions at the Max Plank Institute for Mathematics (MPI) Bonn and the Institute for Advanced Study (IAS) Princeton. In 2001, he was appointed Professor at the Royal Institute of Technology (KTH) Stockholm, and since 2003 he is a Professor of Analysis and Mathematical Physics at Université de Genève. In 2010 he also established the Chebyshev Laboratory at the Saint Petersburg State University. He is currently affiliated with the Skolkovo Institute of Science and Technology, Moscow, holding a Professor position at their Center for Advanced Studies.

For his groundbreaking work, Stanislav Smirnov was awarded numerous prizes, including the prestigious Clay Research Award, the Salem Prize (joint with Oded Schramm) and the Göran Gustafsson Prize (all in 2001), the Rollo Davidson Prize in 2002 and the Prize of the European Mathematical Society in 2004, culminating with the Fields Medal in 2010. 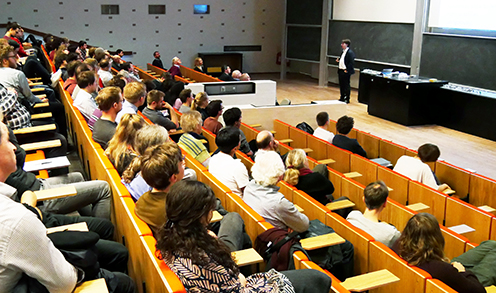 Over the last decades, there was much progress in understanding 2D lattice models of critical phenomena. It started with several theories, developed by physicists. Most notably, Conformal Field Theory led to spectacular predictions for 2D lattice models: e.g., critical percolation cluster almost surely has Hausdorff dimension 91/48, while the number of self-avoiding length N walks on the hexagonal lattice grows like $(\sqrt{2+√2})^N N^{11/32}$. While the algebraic framework of CFT is rather solid, rigorous arguments relating it to lattice models were lacking.

More recently, mathematical approaches were developed, allowing not only for rigorous proofs of many such results, but also for new physical intuition. We will discuss some of the applications of complex analysis to the study of 2D lattice models. 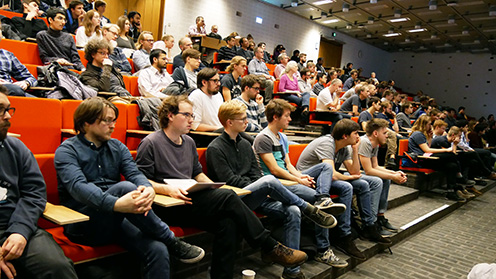 More on Stanislav Smirnov and his work: