The Department of Mathematical Sciences is proud to announce Professor Peter Sarnak of Princeton University and the Institute for Advanced Study as the next distinguished Harald Bohr lecturer. His lecture, titled “Navigating U(2) with Golden Gates” takes place on Tuesday 13 June at 15:15 pm, in Auditorium 4.

Here is the Abstract of his lecture: "The problem of devising optimally efficient universal gates for quantum computing is one of finding the best generators for rotation groups. We will discuss recent developments concerning ‘Golden Gates,’ which are number theoretic generators of U(2). The tools range from groups associated with the platonic solids to modern diophantine problems of sums of squares."

Peter Sarnak, Eugene Higgins Professor of Mathematics at Princeton University and Professor at the Institute for Advanced Study is a world-leading mathematician, whose work has enormously influenced the development of several areas of mathematics, including analysis, number theory, combinatorics, geometry, and mathematical physics.

Peter Sarnak was born in Johannesburg, South Africa. After obtaing a B.Sc. degree from the University of Witwatersrand in 1975, he moved to California to continue his studies under guidance of Paul Cohen at Stanford. He obtaind his Ph.D. from Stanford in 1980. He then moved to the Courant Institute of Mathematical Sciences as a postdoctoral fellow, where he was quickly promoted to Associate Professor in 1983. He returned once again to Stanford in 1987 as a Professor of Mathematics. Since 1991, he has been a Professor at Princeton University, becoming Eugene Higgins Professor of Mathematics in 2002, and, since 2007, he has also been a Professor at the Institute for Advanced Study.

Sarnak is a member of the National Academy of Sciences (USA), and an elected fellow of the Royal Society (UK) and of the American Academy of Arts and Sciences. He holds honorary doctoral degrees from the University of St. Andrews, the University of Chicago, Shandong University and the Hebrew University of Jerusalem. He has been a plenary speaker at the 1998 ICM in Berlin. He is an editor of the Annals of Mathematics.

His honors also include the 2014 Wolf Prize in Mathematics, the Lester Ford Prize of the Mathematical Association of America 2012, the Frank Nelson Cole Prize in Number Theory 2005, the Levi L. Conant Prize of the American Mathematical Society 2003, the Ostrowski Prize 2001 and the George Polya Prize of the Society for Industrial and Applied Mathematics 1998.

"His work has distinctly shaped analytic number theory by introducing new and powerful spectral-theoretic techniques to the study of many deep and longstanding problems. One of Sarnak’s most outstanding contributions to number theory is his study of zeros of the zeta- and related L-functions. His work (with A. Lubotzky and R. Philips) on Ramanujan graphs has demonstrated a profound connection between theoretical computer science and deep results in number theory."
(The University of Chicago News on the award of the Honorary Doctoral Degree in Mathematics from the University of Chicago, June 2015, to Peter Sarnak.)

Here are some of Peter Sarnak's own words in a recent interview (December, 2016) at CIRM (Centre International de Rencontres Mathematiques):

"My main interest is the theory of whole numbers. But in order to study equatins in whole numbers (so-called diophantine equations), and prime numbers, in particular, the tools that are used are from all over mathematics, from algebra to analysis, to geometry, to dynamics. So, I am willing to use anything to solve the problem that I am interested in. In fact, some of the most interesting things that I have been lucky enough to achieve do involve relating unexpected fields. One of the beauty of mathematics lies in its unity."

His insights and "readiness to share ideas" have been profoundly inspirational for the work of students and fellow researchers in many fields of mathematics. Peter Sarnak has supervised a remarkable number of PhD students (nearly 50), many of them having become well-established prominent mathematicians at first-rate universities world-wide.

Photos from the lecture 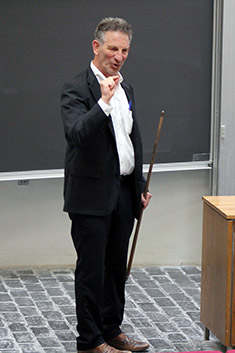