Professor Søren Eilers has received the Science Dissemination Award at a reception 10 December 2013. With the award came the trophy "The Golden Megaphone" and 25,000 DKK. 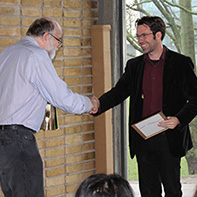 Søren Eilers knows the rare and difficult art to convey mathematics to the general public. So said Dean John Renner when he justified the award.

John Renner gave many examples of Søren Eilers's work with presenting mathematics to non-mathematicians. Among others, his articles and lectures on LEGO bricks. 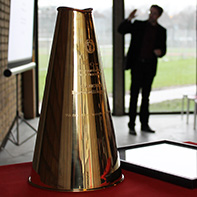 Søren Eilers and the trophy

John Renner also mentioned the DR radio program Detektor’s guessing contest: Guess what half the average of all listeners's guess would be, if they guessed on a number between 0 and 100. Søren won with an answer that was eerily close to the right answer. The prize was a fanfare on the radio - and a lot of PR for mathematics.

This same competition was one of the elements Søren Eilers took up in his subsequent very entertaining mini-lecture, "The Joys of Miscalculations." In the Detektor competition he had made a mistake in his calculations, but got the correct number anyway.

Søren Eilers is a professor at the Department of Mathematical Sciences at the University of Copenhagen. He is also the project manager for the centre Experimental Mathematics in Number Theory, Operator Algebras, and Topology; he is an editor for Mathematica Scandinavica, and he is a member of the Centre for Symmetry and Deformation.

Søren has previously received awards for his teaching. He received the SCIENCE faculty teaching award in 1998 & 2000, and was Teacher of the Year in 2012.