On February 23, Professor Søren Galatius of the University of Copenhagen’s Department of Mathematical Sciences received one of five Elite Research Prizes presented annually by the Minister for Higher Education and Science. The 1.2 million kroner prize honors Galatius’ groundbreaking research in a branch of mathematics known as topology.

Despite Galatius’ young age, he is one of the world's leading mathematicians in his field. The field is topology, a branch of mathematics that addresses how the properties of geometric shapes are retained when shapes are deformed. More specifically, topology attempts to classify form types.

Søren Galatius has successfully made major contributions towards such classifications. In particular, Galatius used one such classification to find the solution for a fundamental problem in the theory of free groups that had remained unsolved for 50 years. Since then, Galatius' work has lead to a new school within the field.

Søren Galatius has a very impressive list of research results, several of which have been published in the three most renown math journals. He has received several prestigious awards, including the Royal Danish Academy of Sciences and Letters silver medal, a Clay Research Fellowship and a Consolidator Grant from the European Research Council (ERC). He was elected into the Academy of Sciences and Letters in 2013.

Søren Galatius hold’s a master's degree (2002), and doctoral degree (2004), both earned at Aarhus University. He subsequently gained employment at Stanford University, where his career progressed rapidly, becoming a full professor in 2011. Since April 2016, he has been a mathematics professor at the University of Copenhagen. 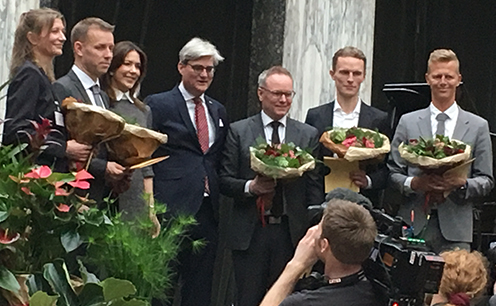 The award was presented on Thursday, February 23, at the annual Elite Research conference in the Ny Carlsberg Glyptotek’s Ceremonial Hall, by Crown Princess Mary and Minister for Science and Higher Education, Søren Pind. The event also saw the honoring of the Danish Council for Independent Research’s Sapere Aude Scientific Head grant recipients and Innovation Fund Denmark’s Grand Solutions Prize 2017, as well as the 2017 Innovator of the Year.

The Elite Research Prize includes a DKK 1.2 million purse, 200,000 kroner towards a personal award, and 1,000,000 kroner for research activities.