Associate professor Magdalena Musat and Professor Mikael Rørdam have received a grant from the The Danish Council for Independent Research | Natural Sciences to the project ”Groups, Actions and C*-algebras”. 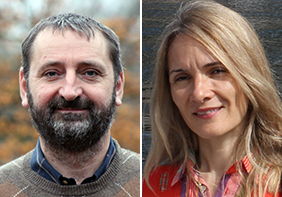 The Council has awarded 45 Research Project Grants to researchers in Denmark in the amount of approximately DKK 142 million. Magdalena Musat and Mikael Rørdam were awarded DKK 2.242.175 for a DFF Research Project 1.

The project of Musat and Rørdam addresses questions at the interface between operator algebras and geometric group theory. From their project abstract:

We wish to examine possible connections between supramenability, growth of groups, and strong quasidiagonality of the C*-algebra. The project also involves boundary actions, Poisson boundaries and expanders. Furthermore, the project also concerns just-infinite groups and C*-algebras, and possible connections to locally finite groups and Grigorchuk’s group of intermediate growth.

The questions addressed in the project are prompted by and related to very recent groundbreaking results. One of them has established the connections between simplicity, uniqueness of trace for the group C*-algebra and existence of normal amenable subgroups, while the other has uncovered the relations between quasidiagonality and amenability.”

The grant contains funds for a PhD stipend and an international workshop to be held in 2018.